Saimir Pirgu sings Don José, who desires and then kills a woman who loves her liberty above all else. In our interview the Albanian-Italian tenor explains what he likes – and dislikes – about the character he plays in Bizet’s CARMEN. 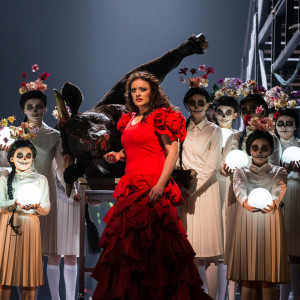 Don José wagers everything he has for a future with Carmen, becoming a smuggler and murderer in the process. Why do we destroy what we yearn for?
Deconstructing the transformation from upright man to base killer is not an easy task. I was really confused the first time I sang Don José. I can’t relate to his jealousy. Maybe it would help if I got to know him even better.

If you had to choose between love and reason, which would it be?
Depends how much I’m in love! I’m not sure it’s acceptable anymore to love and desire someone so strongly that dying for it is an option.

Don José is magnetised by Carmen and yet the pair are always quarrelling. Why are we fascinated by people who are a bad match for us?
At one time or another we all fall for someone who is not right for us. It seems to be part of the human condition. Don José is fully aware that Micaëla, not Carmen, is the right woman for him, and if he’d listened to his intellect, he would have stayed with her, married, had kids and lived happily ever after, saved from – or deprived of – the extremes that he experienced with Carmen. Yet there’s a bit of Don José in all of us. We know a particular person is not good for us, but we take the plunge anyway. We want what we can’t have. We are lured by the impossible.

What fascinates you about Don José?
There comes a moment when a switch is thrown in his personality. Don José gives a calm, even naïve, impression at first, meets Carmen and falls in love. Then he sees her with another man and gets very jealous. He realises she will never give up her freedom, will always be different from other women, will always do what she wants. This is the moment that a dark element takes root and grows within a good man, whose love becomes a hatred that kills.

What have you learnt from Don José?
Don José has taught me to take great care, to think about what or whom I desire – and why. But Carmen has taught me a lot, too! She talks about liberty, about free love. And liberty is scary. No one understands Carmen, not the other protagonists and not most of the people in the audience either. For most of us, Carmen is too extreme. Everyone feels for Don José. Maybe humanity has to reach a higher level of sensibility before it can fathom Carmen fully. We are afraid of the freedom we have to open up and love more than one person at a time.

Are there positive things to say about Don José?
When he opts for Carmen, he goes up against society and his family. He sticks to his guns, come what may. Don José is strong, but still not strong enough to accept an independent woman of Carmen’s stature.

Carmen wants her freedom from ties, and Don José kills her because of it. Women are still dying today because they dare to say ‘No’. What has to change for this to stop happening?
There are two dark forces at work here. Firstly, there’s men’s inability to deal with being humiliated, leading to violence triggered by egregious love. Secondly, there’s the political dimension whereby women in some countries have fewer rights and can’t say what they think or even cast a vote. Homo sapiens has to reach a higher state of awareness before these issues are resolved. We have to understand that love is greater than hatred. Maybe we should be teaching kids different stuff in school. Love and empathy, for instance.