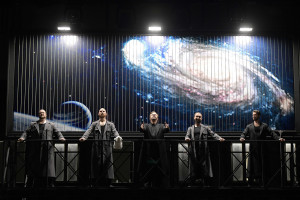 You’re singing someone who’s going ultra-radical. What would make you go militant?
Only something that threatened my family. My wife and daughter.

What type of person would Jean de Leyde be in our times: an eco-warrior or US President?
Nowadays you could pick up anyone from the street and generate such a load of hype around him that he’d think he was a leader of men. That’s what the fanatics in LE PROPHÈTE do with Jean: they build him up to be their redeemer, he swallows the narrative, and it’s his downfall.

What aspects of our world are broken or imperilled?
Stuff to do with the internet. De Leyde is a false prophet and this opera is a study in bad influences. That chimes with the social-media world we live in. A lot of basic decency falls by the wayside – unfortunately.

Populists are a fact of life at the moment. As an American, where do you see the rifts in society lying?
I never talk politics. Many people don’t agree with that, but I don’t believe artists should get involved. If they do, it prevents them from making art. They’re not free anymore.

How does religious fanaticism impinge on your life?
Nowhere, thank God! I am religious, though, and I don’t hide the fact. 25 years ago I had cancer and I overcame it. My faith helped me then and it’s still helping me and my family today.

If de Leyde was alive today, what kind of a person would he be?
Do you know the film “The Manchurian Candidate”, a thriller? He’d be like that! A guy is selected at random, brainwashed and exploited by dark forces as a tool, a human weapon.

Around 1535 the Anabaptists set up a cruel regime in Münster. What’s your angle on this incident in Germany’s history?
The extremists really did seize power and force everyone to join their sect on pain of death. Hardly very Christian. But I don’t know a lot about what went on and I’ll be swotting up on the subject now I’m in Germany.

Many radicals thought they were acting in a good cause at first. Where was the kernel of good, in your mind?
Jean doubtless believed he was doing the right thing. And he was forced to witness his girlfriend being raped. We may understand why he resolved to do what he did, but that doesn’t make it right.

Meyerbeer operas are seldom staged. What things about this German composer stand out in your opinion?
I’ve sung a handful of Meyerbeer roles and I love them all. He’s a bel canto composer but also very much a lover of drama. This opera starts off with a lovely arietta and builds in stature from there. Masterful! Meyerbeer operas are very long and if you start abridging them, they lose their dramatic arc. That’s why they’re not easy to stage. But if you go to the trouble, they pay dividends.

You’re very in-demand as a tenor. What do you do to unwind?
I always head straight back home to my wife Linda and my daughter Isabella in Rochester, New York. That’s how I get my peace and quiet. My career took time to get going. I’ll be 66 next birthday and my singing takes me all over the world and I love that. But the real world is at home and it reminds me that there’s no difference between me and any other family man.