Asmik Grigorian … The stage: a place of serenity for my soul

As long as she can remember, soprano Asmik Grigorian has lived, loved and suffered onstage. Now she debuts at the Deutsche Oper Berlin in the role of Madama Butterfly.

The place where I feel most at peace and at ease is the stage. It’s where I’m at home. It’s part of my soul. My parents fell in love on the stage before they fell in love in real life. They’ve both done opera, as soprano and tenor. I’m literally a child of the stage. It’s a unique space, the stage, and I’ve been connected to it as long as I can remember. I was enveloped in it before I was born.

Thanks to the stage, my life today is made up of many lives. I live a different one each day. The stage is my natural habitat. Every time I walk on stage, I’m carrying a bank of stage memories in me. In every role I do the memories come flooding back. They’re part of my physical being. I can’t recall when I had my first experience on a stage. I attended a music school at the age of five. We were always doing tests and giving performances, so we were totally used to appearing onstage. And then there were the plays I was in. I was once the child in MADAMA BUTTERFLY. Now, when I’m singing Butterfly, it’s not that I have more than a blurred memory of being a child in the play onstage, but when the chorus comes in at a certain point in the proceedings, I get the same feeling of pity welling up in my stomach that I felt for my fictional mother onstage back then. That’s how deeply ingrained my stage memories are in me. 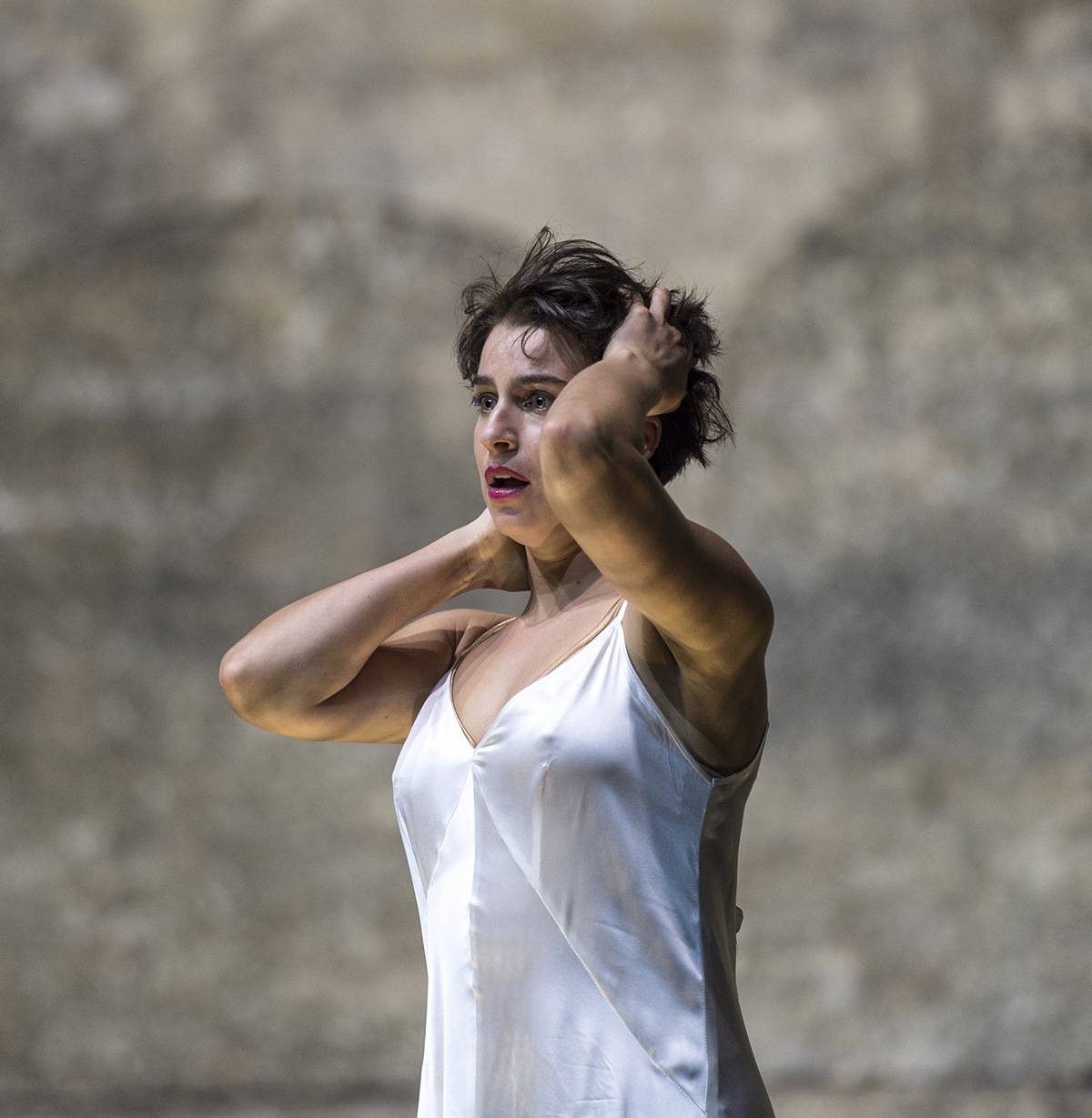 Fear and sadness are as much a part of her stage experience as joy, pride and love. Asmik Grigorian in 2018 as SALOME in Salzburg © Ruth Walz / Salzburger Festspiele

Often there’s someone I know and like in the audience. In my head I also imagine there are people in the audience whom I’m missing and who are listening to me. Since the death of my father four years ago I get a different sensation stepping onto the stages that he sang on, like the Staatsoper in Vienna. I’m aware that my father stood in this very spot, and I feel very close to him at that moment. That’s the kind of ties I have to emotions, stories, memories – and smells, too. Smells embed a lot of things in my memory. But it’s funny how, when I close my eyes and try to remember what a typical stage smells like, I can’t seem to. Each stage has its own odour. As far as I’m concerned, they smell like the various people I interact with on them. 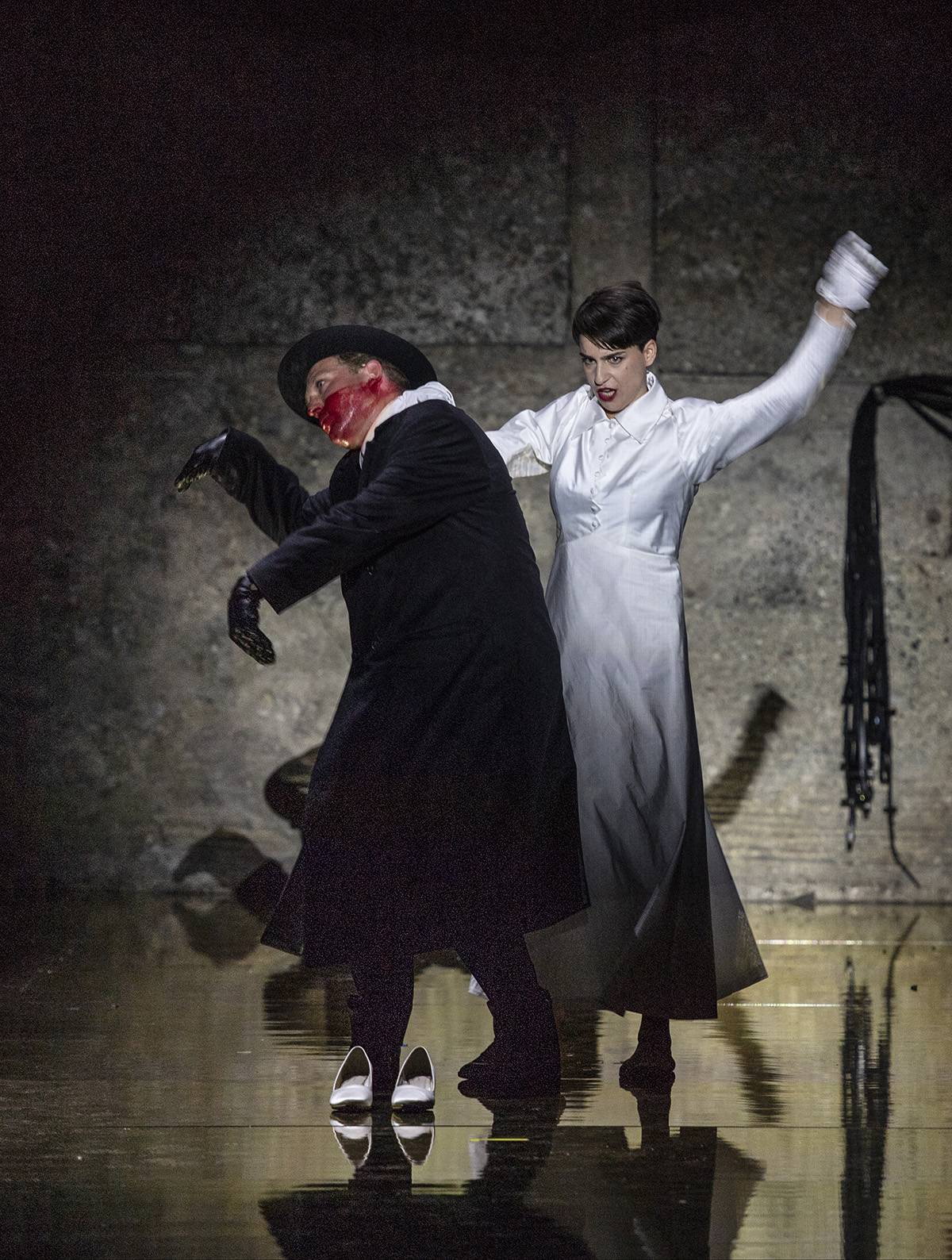 Ecstasy, passion and boundless energy: Asmik Grigorian in 2018 at the Salzburg Festival. Her triumph at the premiere marked her breakthrough © Ruth Walz / Salzburger Festspiele

Then again, as with any serious love affair, my relationship to the stage is double-edged. On the one hand, it was always the most natural thing in the world to be out there onstage. But it’s also a frightening place. I’ve had my share of panic attacks, being scared stiff I’d mess up. It’s a huge test of your ability, a huge struggle! With myself, against myself. I’ve had a lot of really bad moments onstage. The times in the middle of a performance when I’ve found myself thinking »Okay, folks, that’s it. I can’t go on. I’m out of here.« And what’s the answer? Practise, practise, practise, year in, year out, so I know what I’m doing out there onstage, so I’m confident I can pull it off.

The fear doesn’t lessen; I’m just better able to cope with it. Each performance is intense. Some evenings stand out. My dates in Salzburg this year were weird, what with not knowing on any given evening, right up to the last minute, if we were going to get the green light to go on stage. A lot of my colleagues missed the stage hugely during the pandemic, but I was really lucky. I was so drained at the start of lockdown that I was glad to get some time off. And then I soon got the nod again to appear in Salzburg, Vienna, Madrid, Berlin. The premiere of SALOME in 2018 at the Salzburg Festival was a special moment for me too: I got a lot of very loud applause, which I wasn’t prepared for. Or just recently in Vienna: for the first time in a long while I went on stage for my BUTTERFLY debut without taking pills for my panic attacks. It was a really big thing for me to do, but I pulled it off. I was so proud of myself and still am.

MADAMA BUTTERFLY is one of the most moving operas I know. It’s my favourite opera by far, so powerful and heart-wrenching. Butterfly, a young Japanese woman, is waiting for the return of naval officer Pinkerton, her American husband, who left her in Japan with their child. When he finally arrives, he is accompanied by his new American wife and intends to take the child with him back to America. The saddest thing in this opera for me is Pinkerton’s inability to admit he’s at fault. He could say »I’m so sorry, Butterfly. Let’s give it another go and try to make it work.« But he doesn’t; he just runs away. His cowardice never fails to shock me, every time. It’s easy to read Butterfly as a cliché of a woman sacrificing herself for an ideal, but I can see exactly why she does what she does. In my view, her altruism is a beautiful thing. I see her as a tender woman but also enormously tough. That’s why I don’t play Butterfly as a naïve little girl. She knows exactly what she’s doing. She continues to hope, even at the moment of her death. When I’m up there onstage with her, I feel strong and full of love.