Verdi’s MESSA DA REQUIEM will be the first production in over six months to feature the chorus of the Deutsche Oper Berlin live onstage. Why are we so attached to choral singing? An essay by Sebastian Hanusa, Dorothea Hartmann and Jörg Königsdorf

When voices merge into a corpus, when eighty singers sing as one, the effect on some listeners can be almost physically overwhelming. Something happens – be it the welling up of tears or the gut feeling of surging emotion: something happens in the auditorium when a wave of united voices rolls over into the audience. And whatever it is, it is not something that can be measured. There is no rise in temperature or volume, since the decibels produced by a chorus are not appreciably greater than those emitted by a soloist. Nonetheless, something changes when a large group of people get up on stage and sing in unison. And we can sense it, we, the audience, the mass of listeners sitting out there. The only question is: why do energy levels rise the moment the chorus kicks in?

The flood of emotions becomes fathomable if we cast our minds back through history to the birth of the chorus in the theatre of the ancient world, when choruses commented on current affairs and served as a mirror of society. An onstage chorus reflected the relationship between people and the powers that be. Moreover, in the ancient world there was no clear demarcation between chorus and audience: the group of singers onstage was made up of citizens of the polis. This chorus as a band of singing burghers did not survive the demise of Ancient Greece but had experienced a revival by the time the Church was being revolutionised by the Protestants, who treated the Eucharist as a celebration involving the local community and communal singing. Unlike the Catholic tradition, in which singing was the preserve of monks, who were deemed the »professional singers(!)« of the time. With the advent of opera in the baroque period, composers and writers made express reference to their precursors in the ancient world, albeit without taking up the cause of the chorus. Considering the paltry status enjoyed by the common people at the average baroque court, this is hardly surprising: the stage was a platform for celebrating the monarch (the work had probably been written for him, after all).

The chorus only caught on as a feature in opera when the masses came to be considered as an actor in their own right - a force for political change – in the wake of the French Revolution. The common people became a collective political player overnight, spawning a raft of operas on a revolutionary theme and which contained grandiose set pieces for chorus, Beethoven’s FIDELIO being a prime example. The 19th century became the century of operatic choruses and it is the choruses (in works such as NABUCCO and Meyerbeer’s operas) that resound with the self-confidence of the burgeoning middle classes. Emancipation, politics, pride, bloody struggles, hard-won liberty… these are the themes being raised when we hear these choruses. 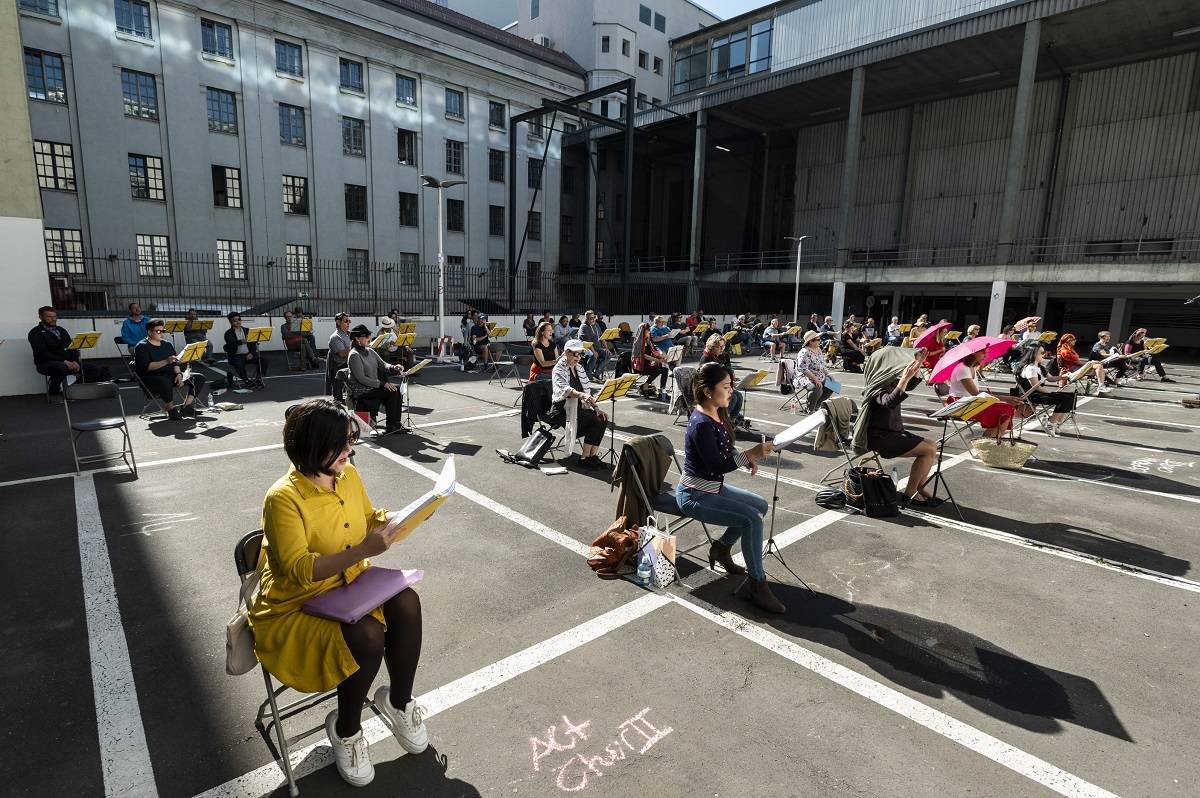 To allow them to stand closer together for the MESSA DA REQUIEM, the singers are being tested for Covid-19 beforehand © Marcus Lieberenz

Parallel to this new age there appeared another innovation around 1800, that great watershed in history. The year 1791, coming immediately after the French Revolution, saw the founding of the Berlin Singing Academy, the first-ever mixed chorus, and it explains our relationship to the chorus. Suddenly here was a group of citizens singing as one and for the pure joy of it, in close physical proximity to one another and giving voice to their own words, unfettered by Court or Church. The Berlin movement, which survives to this day, went hand-in-hand with the emergence of a national awareness and caught on very quickly across Europe.

In their singing academies the burghers also tried their hand at the great ecclesiastical works. In the case of the ST MATTHEW PASSION, sung by ordinary people, a religious work that provided the framework of a 3-hour commemoration of the passion of Jesus in church on Good Friday served as a kind of »pseudo religious service« for and by the bourgeoisie. Verdi’s MESSA DA REQUIEM, too, is an amalgam of the sacred and the secular. Based on the standard text followed at a Catholic funeral, the mass contains a palpable yearning for connection with a higher power – in churches and opera houses alike. Especially in times of uncertainty, Verdi’s chorus in effect represents us, the audience. We experience vicariously the swerves made by the choristers between hope and despair, between fear and redemption.

The line between chorus onstage and people in the audience is a porous one, as evinced by another invention of the 19th century: the national anthem, the singing of which is, at its core, a religious act, with people singing together and feeling a bond with each other. Many composers of opera also wrote national anthems, ushering in the final phase in the secularisation of the opera chorus in the process. The Chorus of the Hebrew Slaves in NABUCCO is also known as »Italy’s unofficial national anthem«. When the piece strikes up, Italian audiences rise to their feet and sing along. We are the chorus! Since the experience of fascism and Stalinism this kind of mass singing in unison is apt to leave a bitter aftertaste: on the one hand we have an unbrookable, unleashed energy, an immersion in sound; on the other hand we see the capacity of a crowd to be led astray, moving as one to a prescriptive beat. Hearts beat in synchrony (a biological fact), but they also throb synchronically to singing in a monastery, in a stadium, during marching ceremonies and at military parades. The deeply felt sound of communal voices has been misused ever since community itself was invented. Hardly surprising, then, that great choral works have always been harnessed for ulterior purposes. For instance, Beethoven’s 9th Symphony, with its »All men shall become brothers«, was a viable work in the fascist period, in East Germany and in the Federal Republic alike. For that reason, very few full-scale operas featuring choruses are associated with the Modernist period. People are sceptical of a crowd in full voice, and thus we see director Benedikt von Peter splitting up his AIDA chorus into its constituent singers and scattering them amongst the audience. 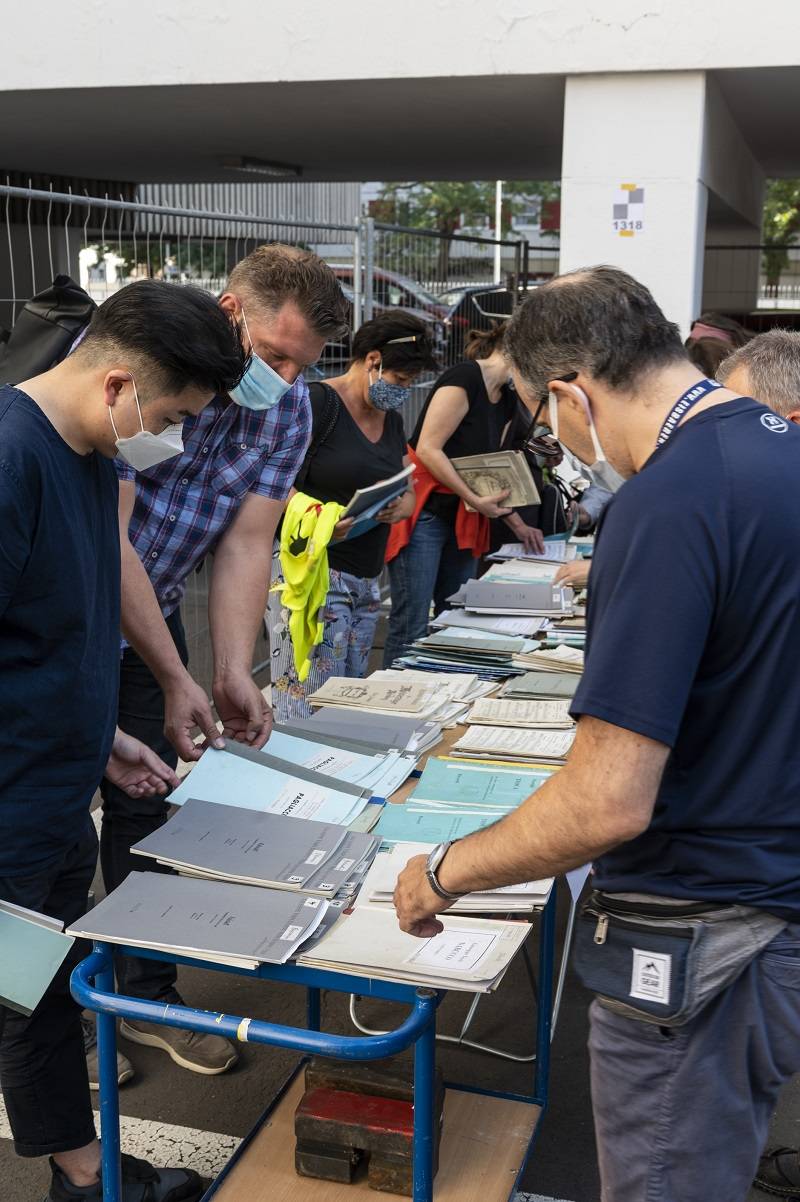 You, I, we. The individual and the collective. Singular and plural. One person and a mass of people. What choruses do is still a focus of interest. We appear in formation, in teams, scaling the heights of full-throated unison – and the next minute we are back in private mode, preferring autonomous individuality. The history of the chorus is doubtless also a story of yearning – for participation and transcendency, to raise one’s voice and relinquish one’s personal specificity as part of the group. Singers are familiar with the beautiful, innocent feeling that comes with the unity of concerted singing, which is why chorus singers are devoid of any ideological baggage when they use terms such as »us« and »the collective«. That is probably what is moving us, when the brunt of many voices hits our bodies in the auditorium: this very special feeling that we are part of a great »us«.